WHAT IS A TREAT? 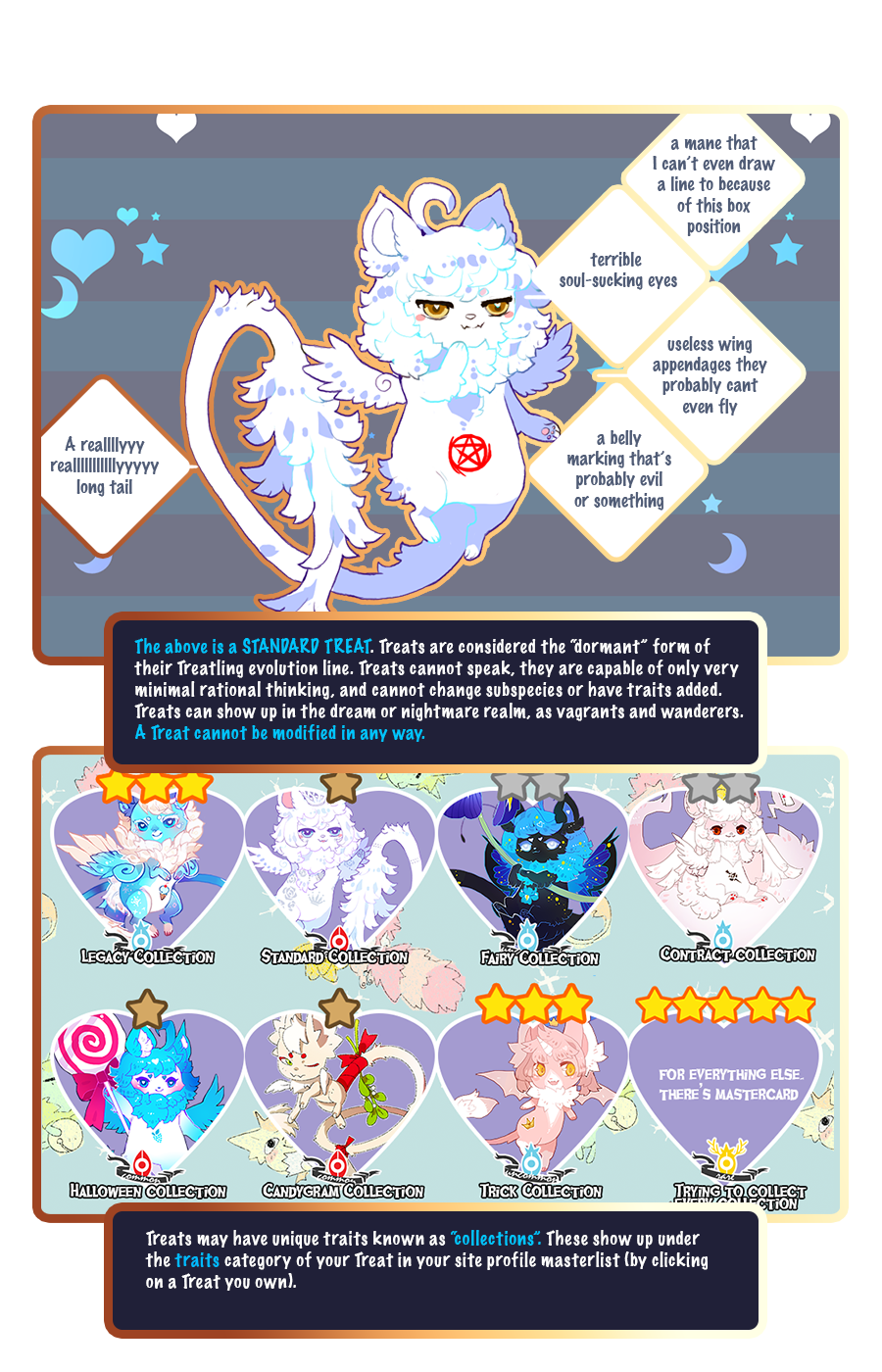 WHAT IS A TREATLING?
BACK TO TOP 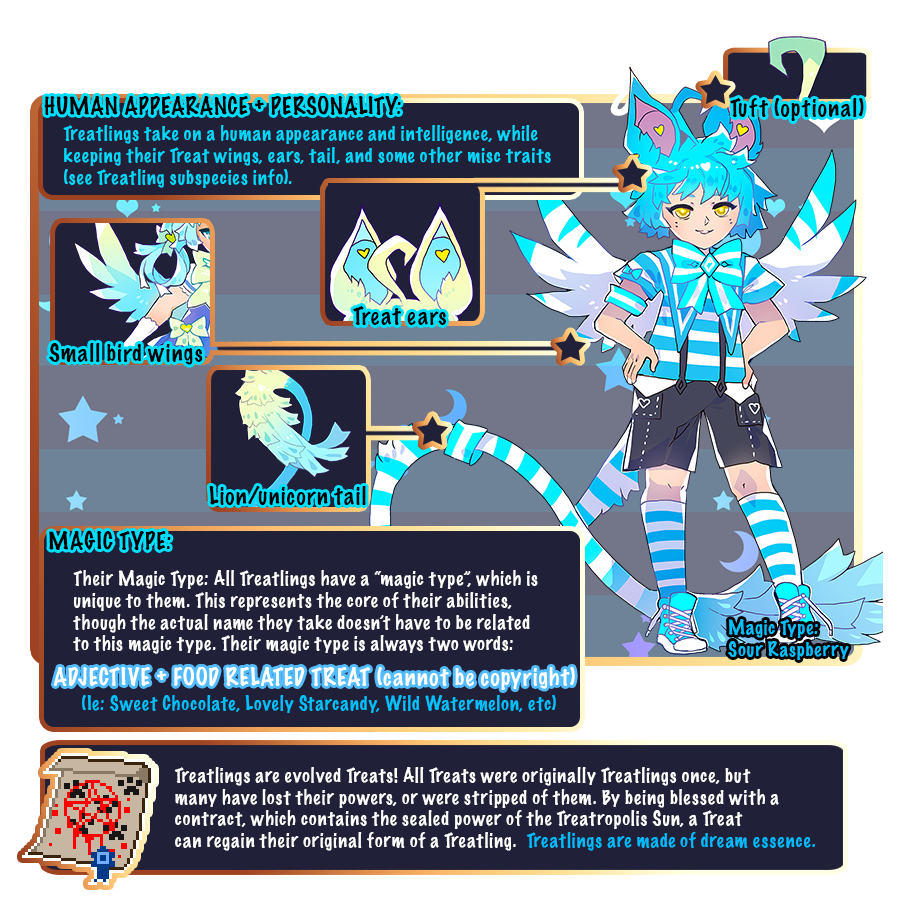 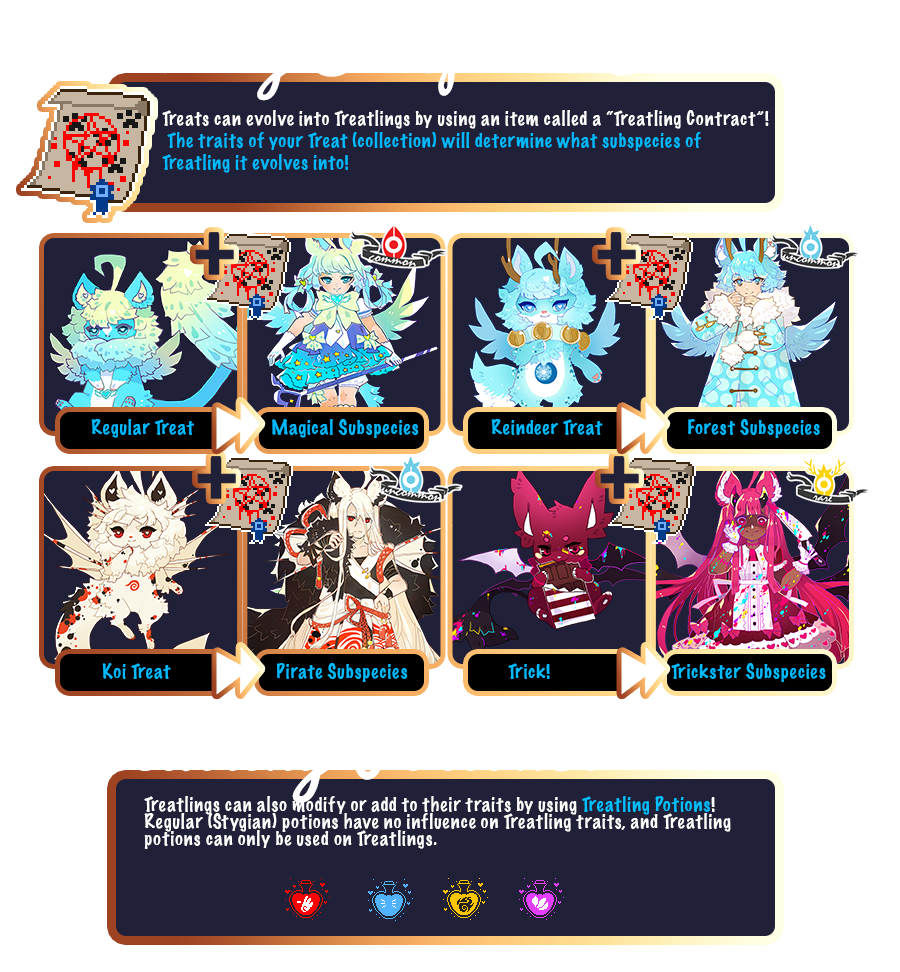 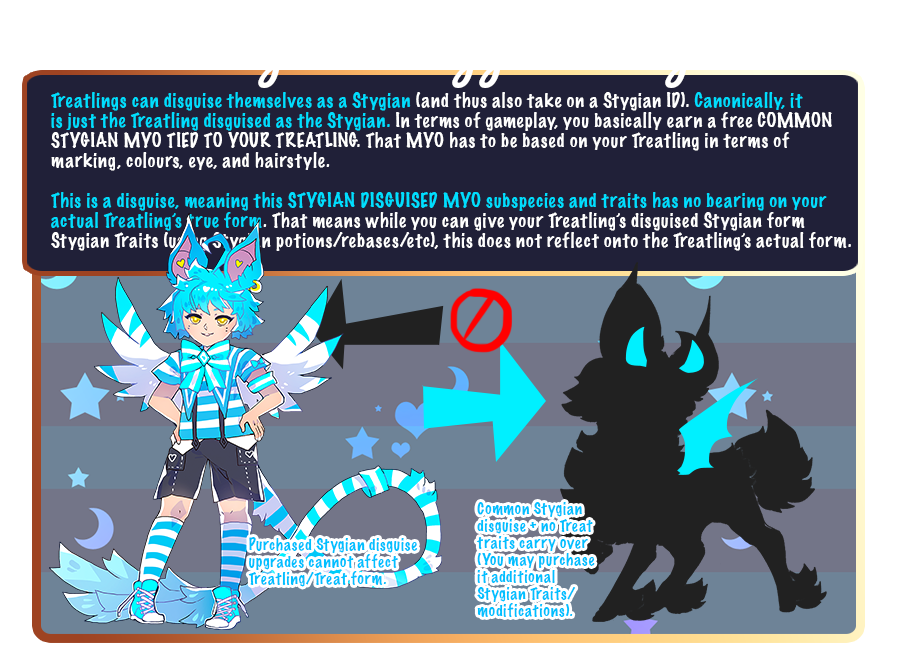 TREATLING LORE
BACK TO TOP

THE LORE SO FAR:

A long time ago, Treatlings prospered in a civilization called Treatropolis. It was the pinnacle of the dream realm, they fought and contested greatly with the nightmare one. However, one day the Treatropolis Sun looming over the city collapsed entirely in an unprecidented, unrecorded cause. The city collapsed and for centuries was nothing but ruins, the sun reduced to millions of crystal fragments. The citizens of Treatropolis devolved over time, unable to absorb the power of dreams from the sun. They turned from Treatlings, into Treats, losing the ability to think, speak, and even their memories of their past, becoming nothing but unusual wanderers. 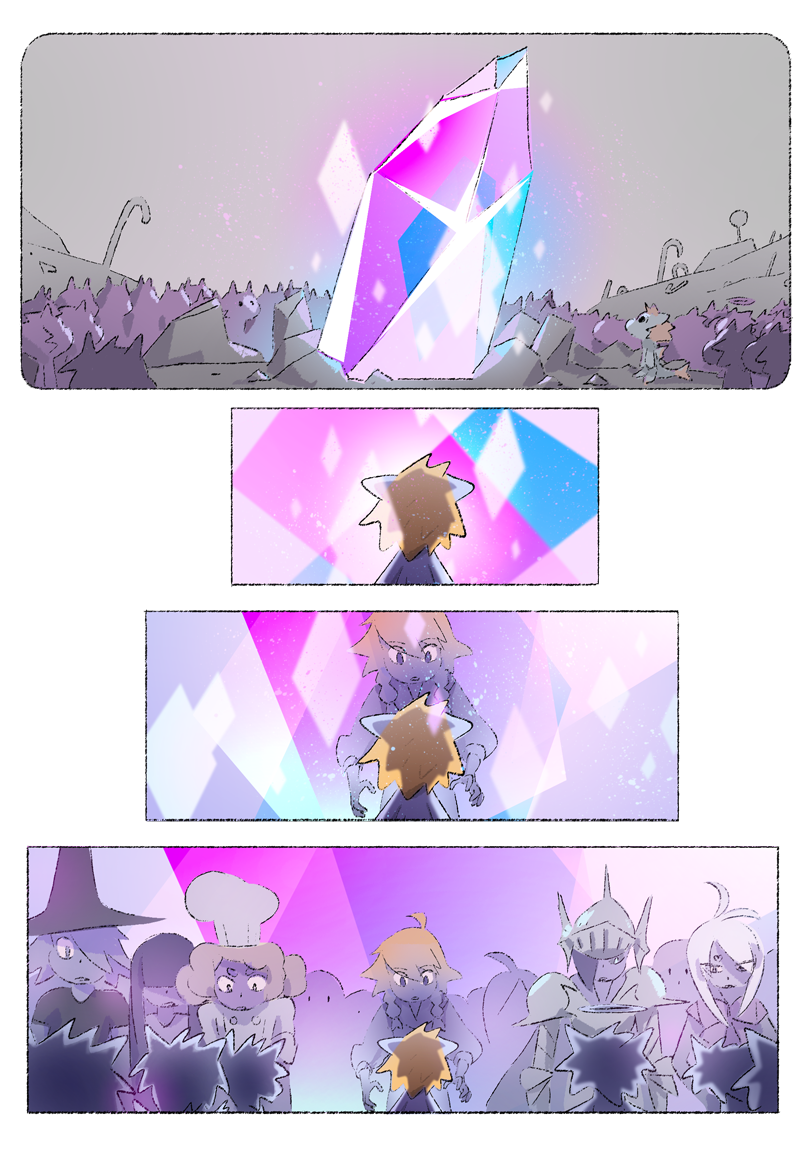 However, all was not lost. With an unusal twist of recent events, Treatropolis was restored. Unfortunately, most Treats have long lost the ability to turn back into treatlings, and require direct contact with the Treatropolis Sun to make them revert back permanently into their original forms. Without the contact (in the form of a "Treatropolis Contract" item), Treats will just remain as Treats: wanderers able to explore and interact with any realm with no direct purpose.

Currently evolved Treatlings live in a fractured state - there are those loyal to the Treatling Queen, and she in turn, blesses them with the best castles (Treatling homes) closest to their grand city of Treatropolis. For the deserters, wanderers, and those who are unsure where their loyalty lies, their homes are on the outskirts of the dream realm, and their castle homes are consistently in trouble. When your Treat evolves to a Treatling, they regain all the memories of the past that they lost. They remember that they used to live in a massive city made entirely of candy called Treatropolis, fueled by the crystal sun. They remember the professions they once kept, the roles they had, the assignments they served, and a grand, bustling civilization full of culture and families. While the city has been restored again, but the issue is, many Treatlings may no longer feel loyal to serving the new Treatropolis monarchy (npcs). If they choose to stay in the city, they will be assigned roles, and tasks that they can prove themselves to be useful to, in preperation for a war against the Nightmare realm, and the Stygians that destroyed their city in the past. It is up to your Treatling whether they wish to stay in Treatropolis (their true home, where they used to belong and serve), or if they wish to remain closer to their Stygian buddies. They can even act as agents either way (either loyal to the queen or loyal to themselves, etc), and even vagrants can escape the wrathful Queen's eyes and visit their own home city time to time.

TREATLING CASTLES
BACK TO TOP 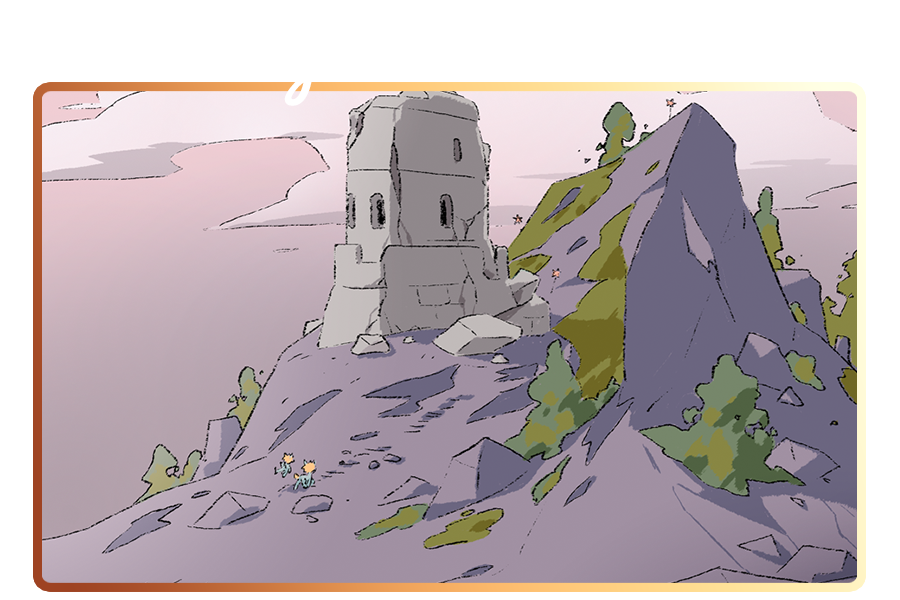 Like Stygians that have Nightmare Kingdoms, Treatlings all have a "dream" they originate from that serves as their personal home base. This is the dream that created them, though it could have evolved or changed over time to adapt to the Treatling's own interests and personality, and even their memories and hopes/fears. Their originating dream acts as a home for them, and the recurring theme in every single Treatling dream is THERE IS ALWAYS A CASTLE OF SOME SORT IN THEIR DREAM.


This castle can take any shape or form, but because of this, each Treatling's dream home are often called "castles". These castles can be as large as an imagination for dreams can be, as is the entire world (it could be an underwater castle for example, or a castle that is made entirely out of cardboard with a dream made of paper and crafts). Stronger, more powerful castles may show up for Treatlings closer to Treatropolis because of the extremely powerful dream influence of the Treatropolis Sun, while weaker castles border the edges furthest away from Treatropolis. For the weaker, more estranged Treatling castles, sometimes they will attract unwanted attackers that they have to drive off in the form of lesser nightmares. 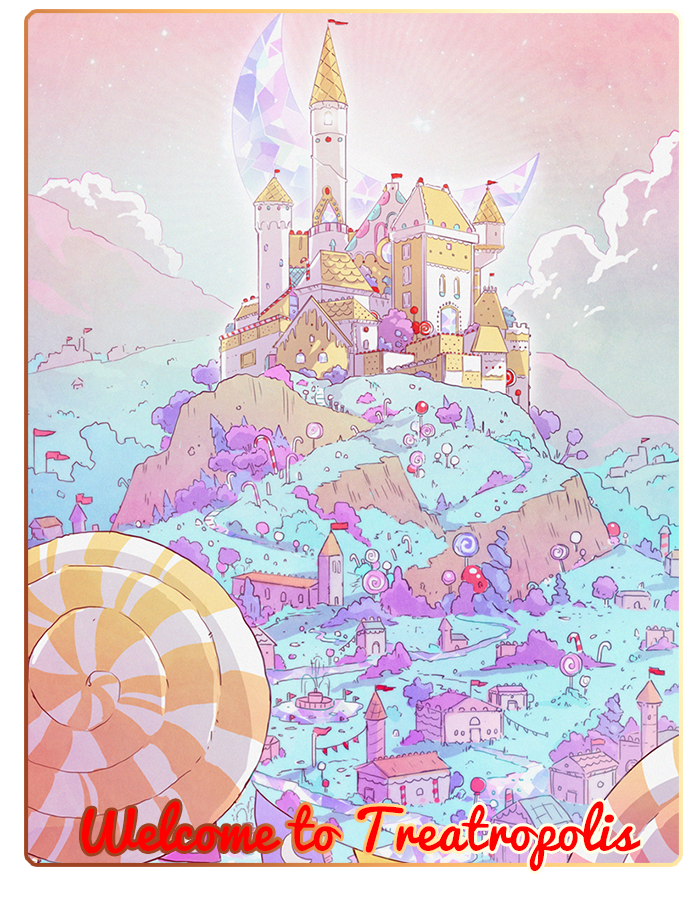 The Agora
A large, circular opening at the gates of Treatropolis where all the vendors come to gather with there stalls. Here you can find ingredients for almost anything sweet and confection-y, and occaisonally if you're lucky, even some unusual spicy flavours as well. In addition, vendors here sell some very rare, but desired goods: potions, daydreams, cards, weapons, and other great wares. The diversity of the agora only grows over time, and it also seems to be a great shopping hotspot overall.

Strawberry Sundae Sanctum
A dome-shaped monument made entirely of wafers and icing with strawberries adorning the outside rim. There is a skylight in between the interconnected wafer and icing patterns, and inside the sanctum are 12 statues, each one depicting a Treatling holding a different weapon in the order of: double handed-sword, shield, hammer, axe, bow, halberd, daggers, rapier, longsword, staff, wand. The last is not holding a weapon. An inscription below them reads "the 12 guardians".

Spun-sugar windows of various depictions of weapons inlaid with a strawberry border reflect through the light in a beautiful stained glass pattern, though the most impressive feature of the sanctum is the round hole in the very center of it on the floor, and infite crystal well that seems to go to eternity.

Lost Library of Treats
At the end of a long canyon of statues worshipping various Treatling gods (usually just Treatlings holding different weapons) lies the Lost Library of Treats. The library is entirely lopsided: the architect did not give much thought to the foundations of the place, and each floor adds to the unusual circular, cylindrical design. Books are still stored on some of the floors, other floors are still in a state of disarray as they have yet to hire any form of librarian. Here, you'll find some archives such as how to cook a great candy turkey, or why strawberry milkshakes are better than chocolate.

Sw*dish Fish Fountain
A massive fountain with an inexplicable statue of an upright fish, holding two amphoras in both fins. While the fountain is cheerfully spewing a clear, diet soda, and swimming at the bottom of it are swedish fish of various colorus.

Galleria of Starfruit
An observatory at the very top of a decript cliff, it now reads "GALLERIA OPEN FOR OBSERVATIONS". Reconstruction effort has been continued on restoring the ceiling of the galleria, a flat, massive structure supported by beautiful marbled buttresses. The painting at the ceiling depicts what look like a night sky, though the colour has faded over time. There are now beautiful windows lining the walls still shaped in the formation of different stars, and

Labyrinth of Lollipops
This labyrinth is still what it was prior to restoration: a ruthless, wild maze with nearly infinite dead ends and only one exit. If the sticky sugar from the lollipops does not catch those in its path, the endless bright swirling colours that seem to meld into one another have driven many who did not have a qualified guide with them quite mad. This is now deemed a National Lollipop Forest Reservation Site and signs are put everywhere helpfully such as "don't harrass the local wildlife", or "don't touch or eat anything". There is indeed a plethora of candy-based wildlife in this labyrinth (forest), though the smaller ones are friendly, some can get quite hostile. 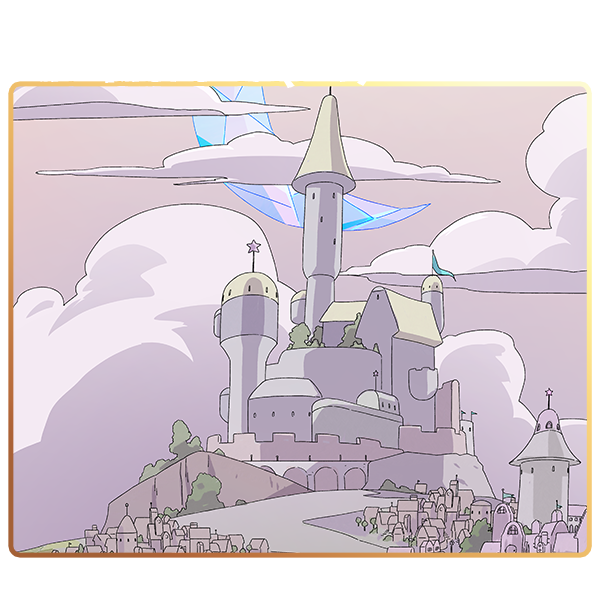 At the very center of the city is an even more majestic castle. Its impossibly high to scale parapets and incredibly deep moat make it nearly impossible for visitors, and hardly anyone has ever seen the interior of this place. It is rumoured that the castle is tended by a host of invisible Treats, but since nobody has seen the Treats, nobody can also confirm, nor deny, that this rumour is true. It is her Her Majesty Queen Vanilla resides, the castle gates barricaded by her sturdy guards. Those who are lucky enough to sneak a glimpse inside the castle are greeted with endless half-abandoned rooms, empty corridors, and walls stripped of many tapestries. A stained glass window paints a picture of a great Treatropolis War that happened in the past, and the throne room has some, just some, portraits of the Treatropolis royal lineage. 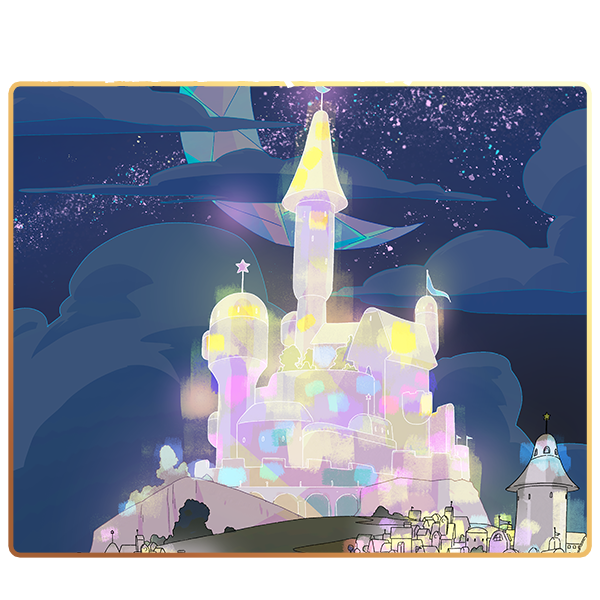 Without warning, you find yourself in a strange alternate reality of Treatropolis. Everything is oddly eerie, silent, cold and still. Instead of residents of Treatropolis, there are only crystals scattered everywhere, and the baleful, pale Treatropolis Sun staring at you. You feel a chill, as if it is watching you, as if it has you trapped within its domain. The more you explore of this barren place, the more you realize you cannot leave. Not without its permission. Not until it closes it eyes at last, and you can escape this unusual place, this In-Between dimension that is neither Treatropolis nor anything of nightmares.