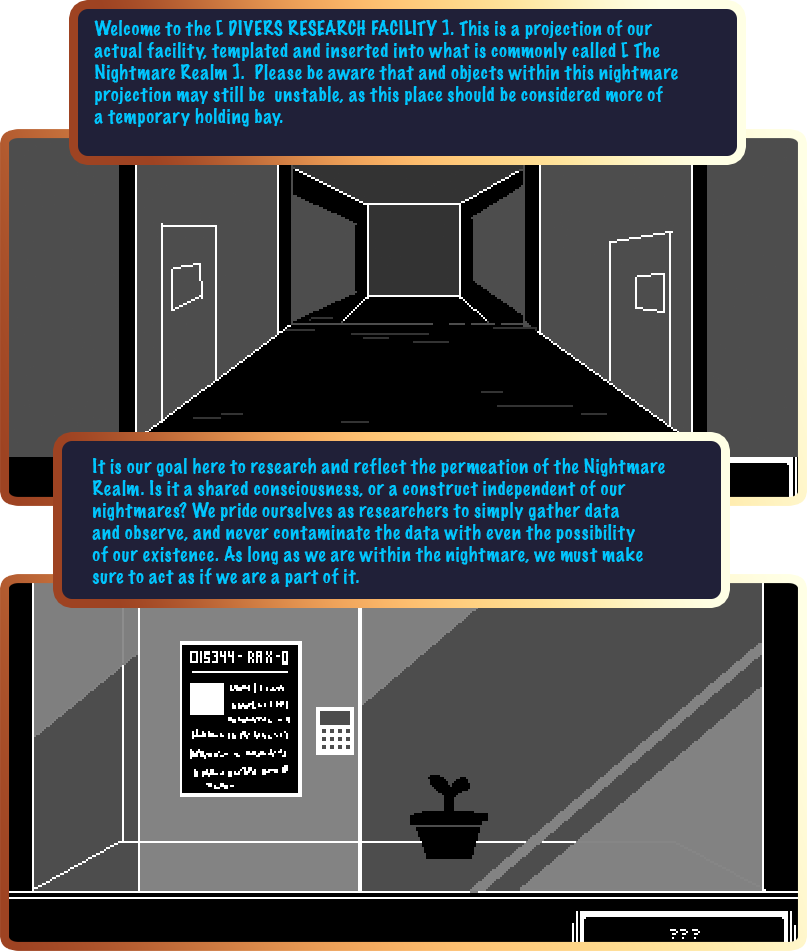 
DIVERS + THEIR ORIGINS
BACK TO TOP 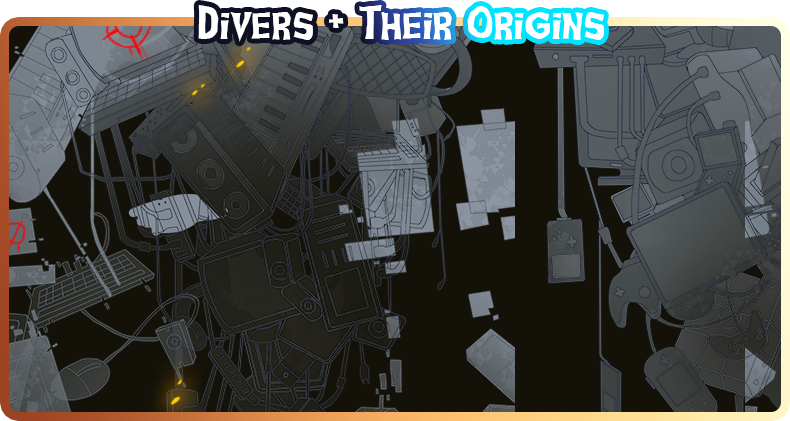 THE LORE SO FAR:

Divers are the consciousness of humans in the human world, basically the “dreamself” of a person when they descend into a dream. They are labelled "Divers" for the ability to traverse freely into the Dream and Nightmare realms, their origins in the waking world is simply humble research, at a local (location undisclosed) university, attempting to prove a theory about consciousness outside of the waking human mind.

IMPORTANT WHEN QUESTING: Because Stygians focuses on the ARPG within the Nightmare/Dream, it will only feature quests and events of Divers existing INSIDE the Nightmare/Dream realms. Anything outside of it can be alluded to, but CANNOT be used as a quest. This shares the same concept with Stygians, where you can never see their dreamers, but you know they exist (in this case the divers ARE the dreamers, they exist in the human world, but quests CANNOT be written for ARPG points of their human existence, though real world objects and occurences can be referred to in the arpg when they are in the Nightmares. 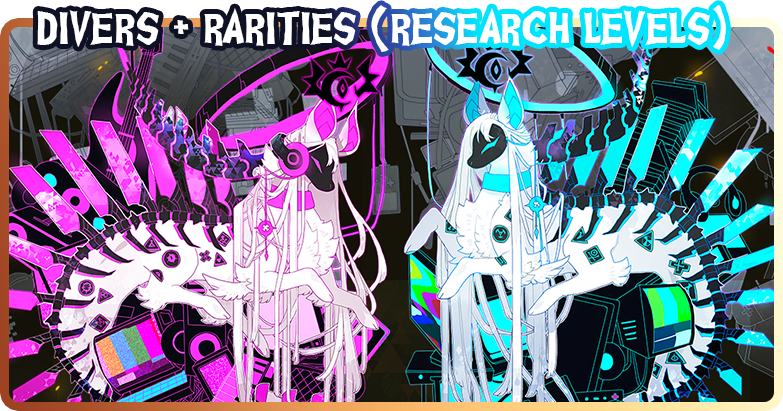 Divers rarity is only affected in their human disguise forms. In their Stygian disguise forms, like Treatlings, they can pick any manner of potions with the usual Stygian allotment. Their Stygian forms will be certed with the Stygian rarity. However, for Diver Human form rarity (and legendary status), their artificial traits are limited on their rarity. So a Diver of common (research level 1) rarity, cannot show more than common artificial traits, one of uncommon (research level 2) cannot show more than common - uncommon, and rare (research level 3) show common to legendary artificial allowed traits. There is speculated to be a way to increase a Diver's research level through specific QUESTS (coming soon.)


DIVERS + THE NIGHTMARE KINGDOM
BACK TO TOP 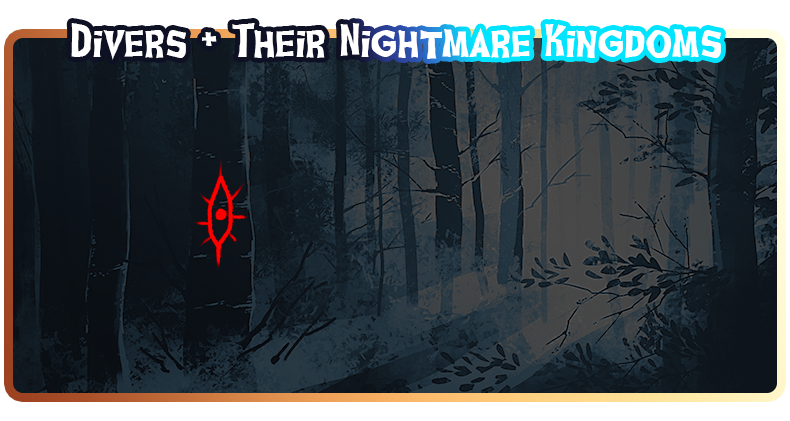 The same rules for Stygian Nightmare Kingdoms follow for Divers - only ONE Artificial Kingdom can be created per Diver - though ones that have been granted "level 5 researcher" status, are allowed multiple (ooc: Legendary Diver + Stygian)
About The Research Facility

The recieving or, "arrival bay" of all Divers landing from the waking world. This area "recieves" them, and allows them to maintain, and latch on to their consciousness in a semi-lucid state, so they are aware that they are in a Nightmare, instead of being absorbed by it. Without the Research Facility, any consciousness would simply be assimilated into the Nightmare without a will of its own. By connecting a template to several interlinked artificial consciousnesses, a fake nightmare that has no will of its own was created. This is once again, the Research Facility. Only those who have registered their REM signatures within the waking world (the very specific researchers doing the diving), can be recieved and identified by the Research Facility. It acts as both an anchor for those Divers, and a conversion point, to allow them to create their own artificial, nightmare-produced human and Stygian forms.

Of course, all hardworking staff deserve a respite, even if its within the Nightmare Realm itself. Within the Research Facility is a simple room, with a couple of vending machines (while edible, this creates no satisfaction eating nightmare particiles with an artificial nightmare form), a coffee machine, and several break tables. This room is a reflection of the staff room in the actual waking world, except in this one you are literally relaxing. Here, Diver (researchers) can share their notes or talk to each other about coordinated efforts. If another Diver comes at you about their "extremely cohesive thesis" though, its time to run... Next to the staff room is the computer terminal, where Divers have tried with various levels of success to customize their own nightmare data (this is where their Nightmare Kingdom customization template can be obtained)

Most research and data collected is to understand the scope and size of the Nightmare (and Dream) realms. Is it truly an existence or just a consciousness? Is there more than just visual noise, and how are consciousnesses shared, such as Diver to Diver? There are so many other questions that remain unanswered, thus all data collected is often examined in detail in the Containment Bay. While it sounds ominous, it is mostly comprised of obtained commonplace Nightmare Realm objects such as shadow tokens, or empty flower pots. Occasionally, a Diver will get super excited and bring yet another floresce back for some unknown reason. By isolating these specimens, they can be examined, and studied, without interference from other objects or entities. Notes are often, to the best of a Diver's ability, posted about each object being examined, though they can also check out a room to research a specimen more as well. "LIVING" specimens, such as other Stygian, Treats, or Treatlings, are NOT ALLOWED, as this compromises their existence and ability to research covertly.

Behind the staff room is a computer terminal - though only one user can be logged in at a time. Here, Divers can (canonically) customize their Stygian disguise forms, create their first Nightmare Kingdom template. Once again (save legendary status aka "level 5 researcher" permission), it is one Nightmare Kindom per Diver. As a Diver cannot really use potions themselves, they dispense the potions at the terminal to be examined, and the terminal scans them for compatible data. Then, they can access the terminal to customize their Stygian Disguise form + scanned addons, and take its appearance outside of the The Research Facility (ie while visiting actual places in the Nightmare/Dream Realms).